Start a Wiki
watch 01:36
Who is Sin Rostro?
Do you like this video?

Rose (born Clara Ruvelle, commonly known as Sin Rostro) is a recurring character on Jane the Virgin. She is portrayed by Bridget Regan.

Introduced on the series as Rose, a whip-smart former attorney[1] turned socialite wife to Emilio Solano[2], she is revealed to be the notorious drug lord Sin Rostro, when she murders Emilio Solano[3]. Before marrying Emilio Solano to set up an illegal plastic surgery operation to alter criminals' faces at The Marbella, Rose met and fell in love with Luisa[4]. Rose is quick-witted, cunning, ambitious and described as a "textbook sociopath" by a linguistics analyst in the Miami Police Department.[5]

Rose is introduced as she comes to Luisa's legal aid, due to the latter's accidental artificial insemination of Jane Villanueva[1]. Luisa and Rose's past relationship quickly reappears[2], but is halted by Rose's continued insistence that she is happy with the life she leads and that she and Luisa cannot have a relationship beyond their secret rendezvous[6]. While Luisa disappears, Rose is adamant to Rafael that she's not drinking, and is shown to worry about Luisa, wanting her to return and calling her[7].

Following Luisa's return from a drinking bender and subsequent sessions with a shaman, she wants to tell her father about their relationship, which prompts Rose to tell Rafael and Emilio, and have Luisa committed to a psychiatric hospital[8]. When she later needs information on Emilio from Luisa, Rose apologizes to Luisa for having her committed and sleeps with Luisa again[9]. Rose lays groundwork telling Rafael she suspects Emilio is Sin Rostro and when Emilio wants them to go away together, Rose kills him[3].

Following the murder, Rose is calling an associate saying they need to move quicker than anticipated following this 'development' and takes her wig of red hair off, revealing her real hair color to be strawberry blonde[10]. Before Detective Cordero figures out that Rose is Sin Rostro, she leaves the Marbella[10], but rings up Luisa to tell her that she wants Luisa to run away with her[4]. Rose is not seen for the remainder of the season but returns in the season finale to kidnap newborn Mateo Solano Villanueva[11].

Rose is revealed to have wanted a flash drive hidden in her broach that Luisa stole[9], but sends Nadine to make the trade for Mateo[12]. Detectives Barnett and Cordero figure out that Mutter must have kidnapped Luisa in order to lure Rose out of her hiding, but to no avail[5]. Rose later contacts Luisa online and they 'stay in touch' for about six months, without Luisa knowing of Rose's whereabouts[13].

When Elena attacks Rafael and reveals that Rose does not have the flash drive, it brings into question why Elena knows about the flash drive, and how she knows that Rose does not have it.[14] Elena flees the scene long before the cops arrive, but asks Rose to meet her in (presumably) Switzerland, where Rose states the drive in the hands of the police is problematic for both Sin Rostro and Mutter, who are revealed to be step-mother and step-daughter.[15]

After Luisa is 'hospitalized' to lure Sin Rostro, Rose shows up at the hospital and attempts to escape by taking Susanna Barnett, hostage. She shoots Susanna and leaves the hospital, but is killed by Mutter[16] – allegedly. After Jane & Michael's wedding, Susanna is revealed to actually be Sin Rostro in disguise, meaning someone else died (and that Mutter was possibly framed for the murder, or simply unaware of the body double Sin Rostro used to fake her own death). Rose was actually working with her brother, Derek, to get Mutter arrested and $200 million, which Mutter had hid in the Fairwick Hotel.[17] Rose asks Luisa to run away with her[18].

As they need to leave and Luisa's too shocked to hurry, Rose sedated and abducts Luisa.[19] Rose hides out in a submarine and tries to convince Luisa that they can be together, but Luisa has a hard time reconciling having Rose in her life with the fact that Rose murdered Emilio, and that Luisa also wants to keep Rafael in her life.[20] Rose agrees to impersonate someone else when they visit The Marbella, but Rafael remains skeptical of "Eileen".[21]

Rose keeps up the disguise for their visits to Miami and quickly tires of the ruse.[22] Luisa's wish to try and be a part of a wary Rafael's life is ultimately Rose's downfall, as Rafael lures them to the Marbella by lying about being sick again. Rose and Luisa are ambushed at the hotel by the police, who unmask "Eileen" and Rose is finally imprisoned for her crimes.[23] With Luisa owning the majority of the hotel, she tries to claim its insurance money to get Rose out of prison by depositing a specific amount of money into a secure account to activate a fail-safe escape Rose has set up.[24]

This fails and Luisa is set up to believe that she's hallucinating by Anezka and Magda, leading her to check herself into a facility to get better. Once she realises that she's been played, Luisa decides to quietly leave the facility with no forwarding address and give up her relationship with Rose. After finding Luisa in his quest to learn the names of his birth parents, Rafael visits Rose, who knows their names, but refuses to give up the information.

Rose reveals to Rafael that Michael is alive, having been taken away by fake EMTs, which were employees of Rose, then bribing a coroner with a gambling addiction to forge his death certificate. Rose explains that she induced amnesia by subjecting Michael to electroshock therapy, as he had witnessed "Eileen" browsing the Satin Road on her phone, and did not want him to have access to her contacts. Rose prepares to escape prison, sending Bobby to keep an eye on Luisa, while hiring a group of women to double as her, after her ambulance crashes. Luisa then double-crosses Rose, having switched places with a police officer, but Rose uses Bobby as a human shield and escapes before taking Jane hostage to lure Luisa to Rogelio's event. Luisa pretends to swallow cyanide before causing Rose to fall to her death.

Rose has stated that Luisa is the only good thing that has happened to her and that she loves Luisa. She also told Luisa that she is sorry Luisa got caught of in all of this (all of this being Rose's drug trade and plastic surgery business).[4] After 11 years of affairs and a fugitive romance, Luisa elects to leave Rose behind to live the kind of life that makes her happy. Rose, however, is imprisoned and still loves Luisa. The two of them each make up one half of the self-proclaimed "greatest love story ever told".

Rose is a beautiful young woman, presumably in her early thirties, with striking blue eyes and sporting red, wavy hair, which turns out to be a wig. Her natural hair color is a strawberry blonde.[10] 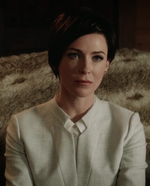 Rose cut her hair short and dyed it black, while undercover and just before she is presumed dead. She had someone facially reconstructed to resemble her to be used as a decoy and they were killed so Rose could continue working under the assumption of being dead. 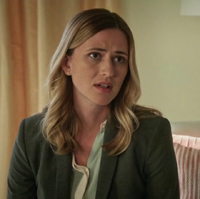 Susanna (Sin Rostro) is Michael Cordero's new partner at the Miami Police Department. Barnett comes across as a very cunning and knowledgeable Detective. She is skeptical of Michael's motives and actions, but neither to the detriment of her professional nor emotional judgment of him. She is later revealed to have been investigating Cordero for Internal Affairs. When she was 5 years old, her father left her and her mother, and she has never seen him since. Susanna is allegedly from Tuscaloosa, Alabama, but is revealed to be Sin Rostro wearing a mask and contacts to disguise herself.

Needing a new disguise, Rose uses another mask to masquerade as a woman named Eileen, who was paid to leave the country and have Rose assume her life. This is so that she and Luisa can finally be together while being around Rafael and his family. However, Rafael stays skeptical about Eileen because of Luisa's past with Rose. Luisa and Rose are together like this for years, but it's wearing on their relationship whenever they return to Miami. Eventually, Rafael figures out that Eileen is Rose and sets a trap for the police to finally apprehend Rose, which they do successfully.

Retrieved from "https://janethevirgin.fandom.com/wiki/Sin_Rostro?oldid=31890"
Community content is available under CC-BY-SA unless otherwise noted.