Season 5 of Jane the Virgin aired from March to July 2019. It is the final season of the series.[3]

Friends! Welcome back to Jane The Virgin... where surprises come at you fast and furious. This is a telenovela after all... Season Four saw our Jane (Gina Rodriguez) falling back in love with her baby-by-accidental-insemination-daddy, Rafael (Justin Baldoni). And she published her first book! Unfortunately, it didn't exactly fly off the shelves, but Jane pushed on and had her biggest writing breakthrough yet, combining her grandmother's story, her mother's story, and her own into a multigenerational love story. And speaking of the Villaneuva women... our matriarch Alba (Ivonne Coll) had a huge year! She began dating again, became sexually liberated, became an American citizen (at last!), and got married!

And Xiomara (Andrea Navedo) certainly had a big year as well. At first, she found herself struggling to adjust to life as a married woman. But she and Rogelio (Jaime Camil) worked through their issues. And then, just as Xo started to get her groove back, she was diagnosed with breast cancer. After choosing to have a mastectomy, she started to go through chemo... which was tough. But she's stayed strong, with her husband's support... Which brings us to her husband, Rogelio. First, he had a baby (named "Baby") with his ex-girlfriend Darci. And then he decided to become a stay-at-home Danny (Dad + Nanny = Danny). And that lasted a whole month! But alas, he found staying home with his baby Baby pretty difficult. And he couldn't resist the siren call of the cameras when the network decided they wanted to remake "The Passions of Santos" for American TV. Can you blame him? That's been his dream forever!

Unfortunately, that remake came with strings; it had to costar his latest, fiercest nemesis, River Fields (guest star Brooke Shields). Which finally brings us to... Petra (Yael Grobglas), who was accused of murder! Again! But Petra denied it and hired a lawyer named Jane Ramos aka JR (guest star Rosario Dawson). And then, she and JR fell in love! And when Petra's life was threatened, JR ran to her rescue, and wrestled the gun away from her would be attacker. But oh no! The gun went off! Leaving us with the classic cliffhanger - "Who did JR shoot"? And speaking of cliffhangers, remember when Jane walked into Rafael's apartment and saw her dead husband Michael (Brett Dier) standing there? Well, I did say surprises come at you fast and furious around here... 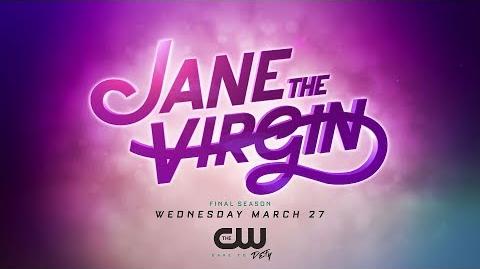 Would Zapping Away a Foe’s Memory Like in Jane the Virgin Really Work? (SLATE • APRIL 2019)

Retrieved from "https://janethevirgin.fandom.com/wiki/Season_5?oldid=31522"
Community content is available under CC-BY-SA unless otherwise noted.