Start a Wiki
watch 02:27
Who is Mateo Solano Villanueva?
Do you like this video?

Mateo Solano Villanueva is a character on Jane the Virgin. He is currently portrayed by Elias Janssen.

Mateo was born in 2015 to Jane Villanueva and Rafael Solano. He has lived his life, so far, mostly dividing his time between two homes; the Villanueva Home and Rafael's apartment. Mateo recently moved out of his great-grandmother, Alba's, house to his mother and step-father's new residence. According to The Narrator, Mateo has a peculiar sense of humor. He tends to find Michael's silliness very funny and gets along great with his parents, spending half of his time with each of them.

Mateo was conceived after accidental artificial insemination performed on Jane by Dr. Luisa Alver. The sperm belonging to her brother Rafael, a cancer survivor, which was supposed to be used for his wife at the time, Petra.

At almost 5 years old, Mateo is causing a bit of mayhem for his parents as he can be a bit hyperactive which he sometimes expresses by hitting other kids or his sisters. Mateo knows that it's wrong and apologizes to his mom, calling himself a 'bad boy' which Jane immediately refutes, saying he can never be a bad person.

Rafael suggests that Mateo release some energy by joining a karate class, which Mateo's sisters have enjoyed immensely. The strict discipline of the art form has a positive effect on Mateo, however, he can still be socially unruly and his parents decide to hire an aide following a suggestion from his school.

Mateo likes his aide, Alex, who is friendly and kind and reports back that Jane and Rafael have nothing to worry about; that Mateo isn't abnormal/scarred in any way, which Alex underlines when Mateo's parents reveal that Rafael was in prison for 9 months when Mateo was 2, and Jane reveals her husband died at that same time.

Mateo enjoys a close relationship with his grandparents and bisabuela, Alba, who support Rafael and Jane by helping out with picking Mateo up or babysitting him.

Mateo is Jane's blessing in many, many ways. He was not a planned child for Jane (as Jane likes to plan her life in strict detail), he is her miracle and his entire existence, from the beginning, has given Jane courage to risk her heart, to test herself, explore and experience life. Mateo's life is Jane's first foray away from her safety net, into a world of adventures – everything she could only dream of and loves writing about.

When Rafael first learns of Mateo, he is shocked at the way Jane got pregnant but also thrilled at the thought of realizing his dream of having a child. While Jane is pregnant, Rafael is excited about the birth and helps Jane wherever possible, but falters when his family issues surface. However, he is still completely involved and present at Mateo's birth and is excited and enthusiastic about being a great father to Mateo and spending as much time with his son as possible. In the beginning, Rafael often feels left out of childcare for Mateo and less a part of the early baby care, as Mateo lives mostly in the Villanueva house. This feeling is exacerbated after Jane and Michael marry, and Rafael realizes he wants more days per week with his son, so he doesn't feel like he's missing out on his son's life, or the life Rafael and Mateo have together. As a young boy, Mateo worships Rafael, who is Mateo's hero. 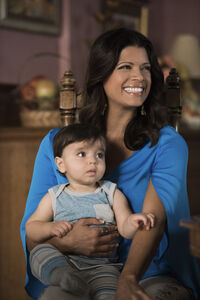 Xiomara often babysits Mateo, while Jane is busy at Grad School and enjoys being a grandmother.[2] She also makes small quips to Mateo about Jane to tease her, similar to Alba and Jane's relationship. Mateo has a great relationship with his grandmother, who often babysits or picks him up from kindergarten and he acts as Rogelio & Xo's little helper/best man at their wedding in 2020.

Alba and Mateo spend almost as much time together and Mateo does with his parents – especially his mother – as he is growing up in her house. After his kidnapping and the subsequent toll on the family, Alba was seen to have Xo and Jane rest and taking over care for Mateo a short while, a strong family unit helping each other in times of need.[3]

Little Mateo is also named after his maternal grandfather, his first middle name is Rogelio. His grandfather likes to incorporate this in their exchanges, calling him 'Matelio'. He is shown to have a good relationship with his grandfather.

Luisa and Mateo have not had a lot of contact. Although physically responsible for the emanation of Mateo[4], Luisa has been absent for long periods during Jane's pregnancy[5][6] and Mateo's paternal aunt was, unbeknownst to his parents, kidnapped at the time Mateo's christening took place[7]. However, Luisa has been consistently supportive of Rafael and his relationship with Jane, as well as Rafael's wish to secure Mateo a great family life. Following Luisa's disappearance with Rose and subsequent reappearance with her 'new girlfriend' (really Rose in disguise), Rafael doesn't trust her and is reluctant to let Luisa into his life, as is Jane. As a result, Luisa hasn't met Mateo and it doesn't look like he will, as Rafael shuns Luisa from his life following Rose's imprisonment, which detonates the former siblings' relationship.

Mateo meets his other great-grandmother for the first time at 8 months old, and they spend some time together hanging out in Jane's room and taking a walk while she is visiting with the Villanuevas[8].

Michael was not only Mateo's stepfather, he was also his godfather. Before his Christening, Jane and Rafael agreed that Lina and Michael would be his godparents, however, Rafael and Michael were not getting along very well and so Jane offered to change Mateo's godfather. Rafael put his differences with Michael behind him and agreed that Michael would make a good godfather. As a stepfather, Michael and Mateo had a close bond and a special connection. Michael often looked after Mateo and would often entertain him with a hand sock puppet of a bee or with his 'impressions'. Mateo called Michael 'dada' before Rafael which made Rafael, understandably, uncomfortable and jealous.

Retrieved from "https://janethevirgin.fandom.com/wiki/Mateo_Solano_Villanueva?oldid=31807"
Community content is available under CC-BY-SA unless otherwise noted.